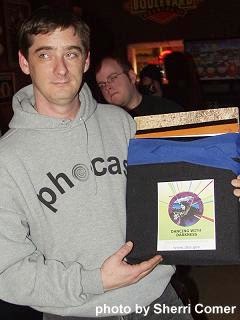 What a completely crazy month and there really wasn't anything going on. What's up with that?

I can't say the phocas staff hasn't been hard at work trying to find some good stories over the last month though. There always seems to be so little to do and so much time. Wait a minute, scratch that... reverse it.

Out of the norm this month, I made trips to the 2 Year Anniversary Party for the Wednesday Perk which filled that little place to capacity, as well as the Grand Re-Opening of the Empire Room where Bill Pill kept people dancing all night long.

I played out again at Davey's Uptown. The photo to the right was taken that night. I love my Record Bag! That was so gracious of the DEA to keep us in mind when they created these bags, though I still don't understand why they would think we're "Dancing with Darkness". Maybe it's a typo? Maybe it should read, "Dancing in Darkness with GlowSticks"?

I also made a trip to Lawrence for PhukLuv with Ming & FS and got the opportunity to sit down and chat them quite extensively about several points of interest to everyone. It was really fabulous when they invited everyone on stage to dance!

From there a took a deep breath, got a little sleep and headed off to New Orleans, Mardi Gras and Zoolu 10 at the State Palace Theatre. I wish I could have had you all there with me. It was a wonderful time, the parties... the parades... the excess... well, you can read all about that in the article.

Finally returning to KC at the end of the month, after an invite by Greg Zoi, I stopped by Chakra to check out their slightly modified look. The look of that place just keeps getting better and better. I really couldn't stay long because I really wanted to go to the Trance party that was happening over on Grand. I really didn't believe Rachel much when she told me that they had gone to a one in, one out sometime around 11ish. When I arrived at 1ish, it was still that way. When I entered the Stray Cat for this party, I was simply amazed at the turn-out. It seemed like everyone was there and dancing! What a great thing to come home to. The massive that I had been looking around for was still here after all. Props to the guyz/girlz that threw that party!