back to the french quarter 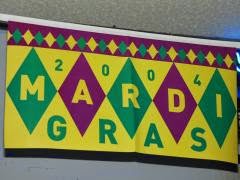 story & photos by todd ~ Mardi Gras is such a strange time to be in the French Quarter in New Orleans. The sites and sounds of excess are everywhere, at every turn. It is a rare moment when you can really escape from the chaos that constantly swirls around you, no matter what day or time of night that you should happen to be out. It's funny and strange that so many people can gather in one place and let themselves go completely over the edge, while at the same time, maintaining their own bizarre level of dignity and order in this little section of New Orleans, and yet here it's somehow Ok. There's a general air of acceptance found here that can seldom matched anywhere else in the United States. Some call it excess. Some would say that it's the devils work, but really... what harm is there in letting people just cut loose a little and be themselves, or be something entirely different for that matter, without fear of judgement or scorn. 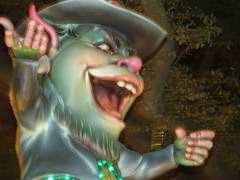 After the party Saturday night, I awoke the next day thinking, "and it's only Sunday". That's right, there were still three more days of partying and there wasn't a moment to be wasted, so off we went, back in to the chaos.

Going to meet some friends up St Charles, the parades were going strong. Mid-City was just passing through and it had quite a crowd, but you could tell that the real anticipation for the Parade-goers was the arrival of Bacchus, the first to break with tradition and stage night time parades, using the Flambeaux to light the way. It's always a fantastic parade and the night was just right for it.

It was really good to be up where we were on St Charles. It was a different perspective. The parade was great and moved rather more efficiently rather than sporadically as is sometimes the case. 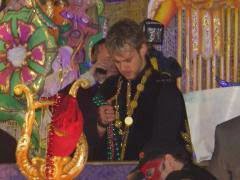 Monday was a really fine sort of day, though it went rainy on us late as we were headed to our most gracious hosts for the evening, Michaul's on St Charles for the Orpheus parade. This is one of the best ways I have found do a parade. The last couple of times, we've gone there for Bacchus and it was always a good time. For a really cheap price, you get some really great food (all you wanna eat), some really cocktails (all you wanna drink) and a guaranteed bleacher spot on the parade route and when your cocktail runs dry while fending off the ariel bombardment of beads, all you have to do is step back inside and get another on their tab. Usually, I have to go get some more of that Bread Pudding too.

Orpheus, was a little lacking in attendance though because of all of the rain that been coming down, but during the parade itself it hardly rained at all. That's ok. More beads for us. The parade itself was nearly as good as Bacchus had been. Somebody mentioned that some of the bands had dropped out. That wasn't really too surprising since we had heard on the news earlier that some of the other parades that evening were being rescheduled for Tuesday.

Mardi Gras arrived for us sometime around Noon. After crossing the river and driving through some bizarre side streets to avoid parades, we finally scored a really sweet spot at the meter on Elysian Fields when some huge caddy pulled out leaving space for a little CRX or something, who was cool enough to cut me in on his find. After a brief stop at Buffa's, to visit one of our favorite bartenders, we headed off in to the Quarter. 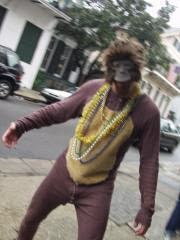 There weren't a lot of costumes about. We had run into a few over on Frenchman, when we were walking in, but not in any significant number, mostly people just dancing in the street. As we crossed in to the Quarter, signs of costume started to appear. First, there was some sort of strange cross dressing hippie prostitute riding on a bicycle that was much too short for his / her stature. He provided just the distraction the wildlife needed though and while I was busy trying to get a shot of him, I didn't even notice the five 6-foot chimpanzees that soon encircled me, waving their arms madly, making the most strange noises. What could they want? I ducked between them and managed to squeeze off one shot of them before they scampered away.

Deeper in on Bourbon we ran into the usual traffic jam of people, near Lafitte's Black Smith Shop. People coming and going out of there, since it's the first bar you really hit going in from our side, unless you're like us and stop at Buffa's for cocktails first. So, while we were kind of stuck there for a moment, I snapped a few photos and then moved to the next Human Traffic Jam, St Anne. The costumes were everywhere it seemed all of a sudden. I got a few got shots there, even one of a girl that I photographed at Southern Decadence a few years ago.

Of course, the balconies were start to fill up as well, beads were flying in every direction. You have to keep on those balconies too. Because sometimes, people think you're looking at them and throw them at you. The next thing you know, you're getting a strand of beads upside your head. 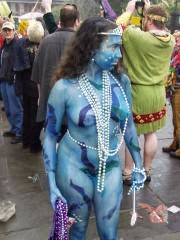 You have to watch out for naked people too. They aren't always obvious. One woman walked right up in front of me, wearing nothing but a raincoat, and opened up for the balcony above. Even the poor guy on the opposite balcony wearing breasts on his shoulders and a football helmet on his head didn't seem quite sure what to think.

Abandoning this woman to her quest for more beads, we wandered further down Bourbon. It was warming a little and Sherri decided that she wanted to costume after all, so we stopped in at some random lingerie shop on Bourbon and she found something to her liking and was soon stripped of everything except the new costume and tennis shoes. This seemed to please quite a few people, but we couldn't linger. We needed to get back to the car so we could ditch her clothes.

We looped back the other direction, in a roaming sort of way. There were costumes, but not as many as usual. I think the rain had damped a lot of costuming spirits. It really hadn't rained that afternoon though. It was just a little misty sometimes. The funny thing about the costumes too was that it seemed to be mostly men that were costuming.

Walking back in to the Quarter, through Jackson Square where we found some guys doing a fire-eating thing, then headed for Bourbon as the sun was starting to sink, for one last walk down from Canal. At some point, I ran into Masa' Smoke, who gave me a copy of his latest cd "Institutionalized: Vol 1 / From Prison to the Pro's" being distributed by Blunt Wrap Records out of Mandeville. Pretty good HipHop.

Bourbon Street was starting to get fairly crowded at this point though and progress was beginning to be measured in hours per mile, so it was time to get moving. It was just then that we realized that the traffic jam had become 5 blocks long. Needless to say, it took an impossible amount of time to reach the other end.

Breaking free of the mass of people intent on being beaded or getting beads somewhere around Lafitte's, we headed to Buffa's to hang out for a little bit with some friends that were just off of work.

Around midnight, after a blessing from the Voodoo Prince, we decided to head over to the street party that's always going, but apparently not this year. That was completely disappointing. Having not had quite enough, we walked the block back to the car, dumped the camera off and everything else off and headed back to one of our favorite places to go dance, The Bourbon Pub & Parade Disco.

There, Mardi Gras night was no different than any other night there and we were soon dancing to some wonderfully banging House tracks for three or four hours. I don't really remember how long we were there. The whole day and evening had been a really great time and we had met some really strange and interesting people along the way. When it was all said and done, going to sleep at 6 am, seemed only natural really.

A special note of thanks to all of our friends in New Orleans. We miss You! And, we would also like to thank Michaul's on St Charles, the River Market, Lucky's, Buffa's, Checkpoint, Coop's, CC's, the "boutique" (sorry, lost your card) on Bourbon, The Dark Entry, the lady at the Toll gate on Wednesday morning, The Saturn Bar, Pascal's Manale, The Clover Grill, The Bourbon Parade & Disco and last but not least FreeBass Society and Disco Productions!

Curious to know more about Mardi Gras, drop in on MardiGras.com, for all the latest information.