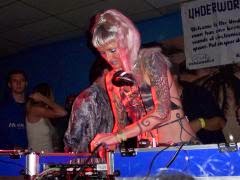 Story and Photos by Gary Adams ~ December 31, 2003 - St Louis, MO. "United We Dance" was a great experience. I'm not quite sure what made the party as good as it was, but I expected less because of the over- used venue. It may have been the D.J.'s, the amount of people, or just the magic of New Years, but it proved that no matter what, it's the people that make the event.

Waiting in line to get in took only a few moment. I watched the kids full of excitement dance around anticipating the party. Walking in, I realized quite a few people had turned out for the party, most in hopes of seeing Polywog, who had unfortunately not shown up for her last booking in St. Louis.

Looking around the party, I noticed a lot of newer faces, as well as many older ones I had not seen in a while. Even though it was still early many people were already dancing and grooving on down. I wasn't feeling the music at first, so I walked around talking to people and meeting some new kids. One reason I love Underworld events is seeing all the new people excited and eager to party. 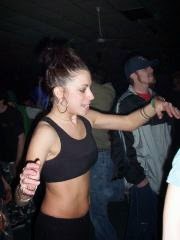 The decorations and lighting were average at best. No one seemed to mind though, because most in attendance were happy to be there.

One good thing about the Aloha building is that although over-used, it has good places to just sit and talk.

The moment Polywog entered the building, you could tell. Everyone recognized her and rushed to meet her. She is one of the nicest, down to earth people I had met. She sat and talked to most of the people flocking to meet her, letting everyone know her fame as a D.J. Her spot in the movie "Groove" had not altered her reasoning for doing what she does.

As everyone raced to talk to Polywog, back in the main room, Antipop went on with their tag set. It was an amazing set to watch. They were having so much fun, and the crowd was loving every moment of their performance. Their music reflected their energy and excitemnet. It was upbeat and sent out a very positive vibe.

The New Year was close, you could feel all the anticipation overwhelming the room. The count down started with Snoopy, one of the people who was throwing the party, standing on the table on stage. Polywog was counting down with everyone . The energy and feeling was erupting from the crowd. Everyone hands raised with each number they bellowed out. Midnight brought in the New Year as people hugged, smiled, laughed, and yelled, "Happy New Year!" 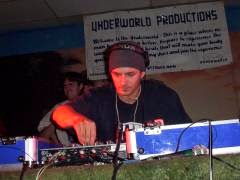 Polywog gave out New Year's kisses right before she started out 2004 with her amazing set. The set was something that was very individualistic. Something I had not really heard before, with some old school songs mixed in and the music refelected the entire night and the feeling that was gathering in the Aloha building. She had some very moving Whitney Houston re-mixed track, and then to completely fill the night with music that matched the feelings the song "We Are Family" broke out and echoed throughout the building.

I'm not sure what made this party what it had became, however I felt very lucky to experience what I had experience that night. For the most part it made me realize why I had started being involved in this as much as I am now, and why I'll keep going and getting involved in it as much as possible.
zine.v1.stories