house without a home 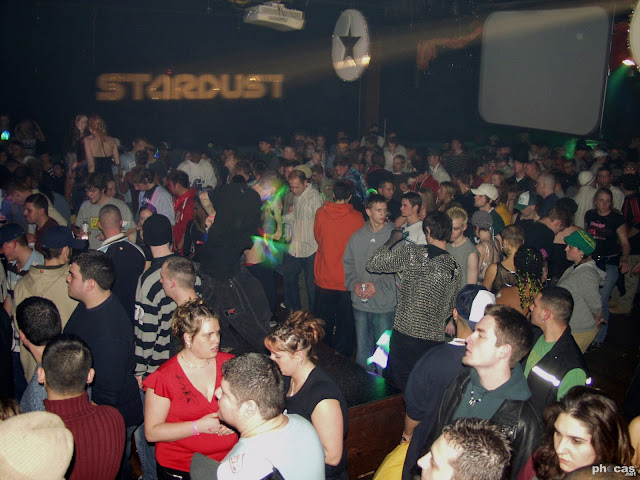 A Post-Rave Chicago ~ Story by Michael Bradshaw ~ photos by todd

On Interstate Highway 55, the Chicago skyline pours into view like a galaxy pluming out of the Midwestern cosmos. The lights of Chicago flicker with the silent poise of the stock yards, Lakeshore Drive, Wrigley Field, deep dish pizza and The Blues. Between the skyscrapers, on the illuminated streets of Chicago’s Downtown, music thumps from a array of sources as the glitter of metropolitan life streams over head and the bodies that crowd the streets jive in unified measure.

The sound of Chicago twists from manhole covers; it unfolds over the streets and lights as you descend the cadences of the city.

In Chicago, it is immediately evident just where the sound of House music and the legend of the Chicago party scene originates. 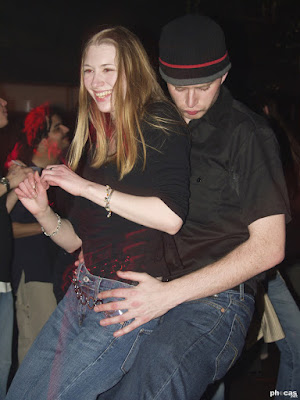 For the rest of the United States, Disco ended with the onset of Punk in the early 80’s. Clubs in New York and L. A. thrust rebel-fueled mutations of guitar rock into the spotlight at clubs like

The Whiskey and CBGB‘s. America was rejecting the feel good rhythm of Disco at the height of the Cold War and fears wrought by nuclear arms. Change was in the air and no one wanted to feel good.

As the transition from Disco to Punk took hold on the coasts, a different revolution gathered momentum in Chicago. Although, mainstream popularity of House wouldn’t reach the surface until more than a decade later, the post-disco era embraced the party circuit in Chicago, boiled over into the global dance consciousness and never let go.

Although Chicago can credit New York as co-creators, the sound of the Windy City is the form of dance electronica known the world over. Thanks to a small cluster of clubs, DJ’s and vinyl press houses, the Chicago sound was allowed to flourish under the command of legendary disco DJ Frankie Knuckles, in the early 80‘s.

Knuckles, resident DJ at the infamous Warehouse club where Disco records blended into New Wave synths and electronic drum lines, transformed dance music into the international phenomenon known as House. From the Warehouse to the local gay club scene, to the influence of the New York Rave scene (which derived from the subsequent European Rave explosion) sprang the Chicago party scene known today.

However today, the future of the Chicago scene is uncertain.

Through the years, Chicago’s dance music scene has been inundated with victories and controversies. Amidst firestorms of resistance from city officials, the media and the office of Mayor, Richard D. Daley and a litany of drug-related deaths, Chicago’s underground Rave community is experiencing a notable recession. 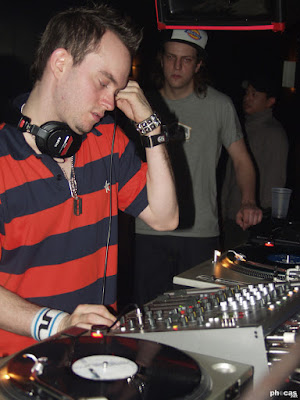 Despite the obstacles set forth by the city, Chicago’s support for the underground dance music by fans remains unaffected.

Smart Bar, a 22 year old nightspot located on Chicago’s East Side in the shadow of Wrigley Field, hosts a cacophony of weekly events highlighting the enthusiasm and rich history of the city’s House and Techno scene.

On any given Saturday night, Smart Bar can pull up four hundred people. Although substantial by club standards, 400 people on the weekend remains in stark contrast to the thousands which regularly attended underground massives in venues like Route 66 in the late 90’s.

However, on the dance floor at Smart Bar, it is apparent the vibe of the party scene has maintained it’s core audience over the years. Bodies grind to the pulsating thud of the sound system suspended from the ceiling of the cavernous basement dwelling.

The crowd is thick with smoke and alcohol, as beams of light scan the limbs of the gyrating crush which flails with celebration.

Smart Bar resident DJ and fourteen year party veteran, Justin Long told phocas the fluctuation of attendance at dance events are inevitable but pressure from the city has forced the underground back, underground.

“[Smart Bar] is the only place dedicated to the underground in Chicago,” Said Long. “This is the last salvation.” 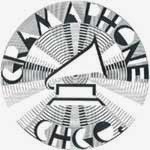 Another institution of the Chicago scene hit by recession is legendary vinyl retailer, Gramophone Records.

Established in 1969, Gramophone has specialized in underground music since the beginning. In 1984, the store narrowed it’s selection to Industrial, Hip-Hop and electronic dance music with the hiring of Andy Moy, now store manager and head buyer.

Moy noted, the DJ Funk mix tapes which appear in the background photo in the insert for Daft Punk’s legendary “Homework” album, were given to the French superstars when they visited the store in the mid-nineties.

Warehouse alumnus, DJ Greg Norwood, now a buyer for Gramophone Records said he could feel that something important was happening in Chicago dance music back in the late 80’s. 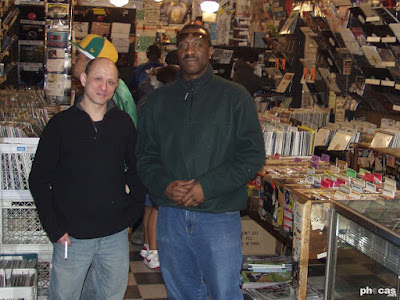 Norwood said, like that of established musical forms, electronic dance music is as much rooted and therefore a part of Chicago’s history as anything else. However, the Gramophone employees say, this fact is not recognized by the city itself.

“[The mayor] has a hard line when it comes to parties and ‘undesirable’ events,” Moy Said. “Luckily the whole Rave scene graduated to the clubs when they got old enough.”

However, Moy continued saying the income of the store is feeling the pinch as well. Factors like the economy coupled with the convenience of downloading tracks from the internet, on top of the city’s systematic deconstruction of the scene, Moy says customers are spending less than half than what they used to on Vinyl. 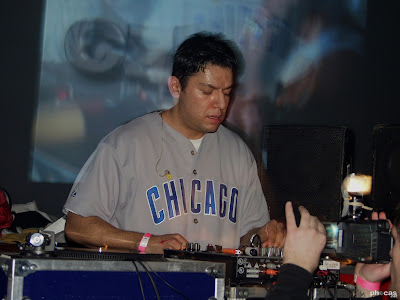 A true Rave is a rare event in Chicago. However, “Stardust 4,” presented by Global Adrenaline and Northstar Entertainment drew a staggering 3,100 people on Sunday Jan. 18th. Making use of the three-day weekend, Stardust 4 hosted an array of top-notch local and regional talent.

The event was set at the Southland club complex, “Oasis 160” where the usual fare includes, Jell-O wrestling, rock bands and wet T-shirt contests.

For Stardust 4, the venue was completely transformed by the promoters, adding extra lasers, projections, enormous hanging star decorations and gigantic letters spelling out the words STARDUST across the main dance floor.

phocas spoke with the party‘s promoter as to why Rave events have taken a recent downturn.

“The biggest reason is the anti-rave law basically that was passed,” Said Christian Banach, head of Global Adrenaline Entertainment, “Really there’s no venues left to do anything in. [Oasis] is one of the very few venues where you can fit in three thousand, four thousand people and legally get away with it.” 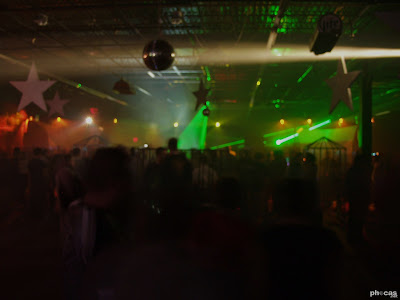 Banach said a combination of factors are responsible for the drop in the number of raves happening. Capped by the pressure from Mayor Daley’s office, influences such as the media and the economy echo the sentiments expressed by the rest of the dance community.

However, this single biggest reason for the decline is the availability of venues.

“If there’s no place to throw parties, there are no parties,” Said Banach. “We even [planned] a party at The House of Blues--[DJ] Keoki was supposed to be there and the city came and told House of Blues "a bunch of shit about us". [The House of Blues] did their research and found out [what the city had said] was completely false.” 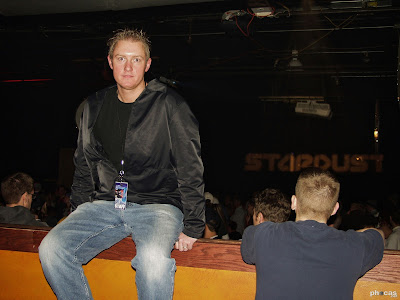 Banach continued to say House of Blue lawyers went to the police and convinced them to allow the party to go on. However, the promoter claims the Chicago police told House of Blues they would be shut down if even one person was found under the influence of drugs.

House of Blues responded to Banach saying the chance of a liability was too great to take a risk on a dance event.

Banach said although things have lessened in the last six months, it is still difficult to get a one-off Rave off the ground. The promoter attributes the city and parent’s fear of Raves to a natural fear of trends that are new.

“This is the new thing that older people don’t understand,” Said Banach, “It’s just like Elvis when he first came out.”

Despite the discouraging circumstances which Chicago natives explained, dance music enthusiasts all agree the city is in the midst of a turn for the better. Many in the Chicago dance community listed a number of factors contributing to the demise of the scene, yet establishments such as Gramophone Records, Smartbar and the party, “Stardust 4” all seemed to maintain a healthy patronage.

What’s more, the essential spirit of Chicago is one which has seen trials and tribulations for decades. Although the city government of Chicago may have taken action to limit the facilities which dance music is played, the soul that gave Chicago dance music a place in the global lexicon, remains. 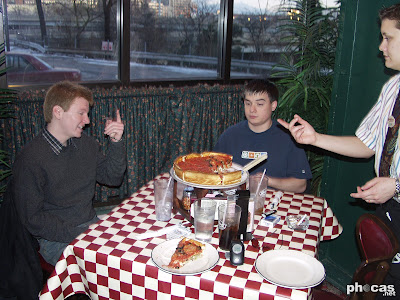 A Very Special Thanks to...

and Giordanos in GreekTown