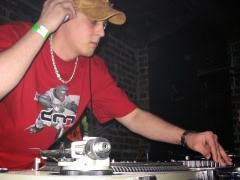 TechnOmaha 1st Anniversary ~ Story by BrentCrampton ~ photos by SteveO ~ Technomaha.com is a web site based out of Omaha, Nebraska. It was started a year ago by the ambitions of Nolan Gaskill, a.k.a. dj Dr. Mindbender. There is a great deal of DJ talent in the area which is one of the reasons Technomaha.com was founded in the first place. The web site showcases various djs from Omaha, as well as a very active forum that has been effective in networking the community.

Technomaha.com celebrated its one year anniversary on January 10th. The day was commemorated by having a celebration party. The entertainment for the night was some local Omaha Dj's, and the headliners for the night were, .Com and C-Vaughan. The former resident of Omaha, .Com, was infamous in Omaha for being able to drop more than 30 booty house tracks in an hour. He was a local favorite that moved away to Kentucky, so it was naturally a celebration in itself just to have .Com play once again to an excited crowd. Although, considering that the music industry doesnt seem to make barely any more booty house records, his styles have changed to include more of an electro feel. The low Technomaha budget somehow was able to muster up enough money to bring C-Vaughan from K.C. to bring the breaks. To no one's surprise, the Kaleidoscope record artist threw down a great set. 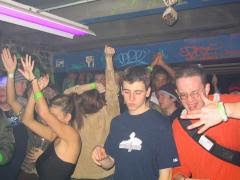 Contrary to the trend in Omaha for parties to flop, the night went on without a flaw, and the attendance was spectacular. There were many young and new faces at this event. The crowd was rather eclectic, as Nolan commented, There were many old schoolers that I haven't seen out for anything in quite a while, as well as many people who are just getting into the sound. From the success of the party, the web site has many new updates planned for the future. Nolan said, We have been able to expand options for all of our users to upload their own productions and mixes so that anyone can download them. Other updates include a larger dj roster, monthly dj features and an image gallery.
zine.v1.stories