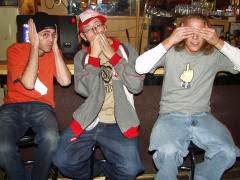 Interview by Michael Bradshaw ~ photos by todd ~ Breakbotix is, arguably, the hottest thing going in Kansas City right now. The members of the three-man live production group can‘t walk through the mall in KC without getting recognized. They’ve blown away acts like Skylab 2000, UFO, Tech N9ne, and Danny Tha Wildchild. Breakbotix, is composed of DJ Soda, Spinstyles and DJ Clockwerk and continues to turn heads across the Midwest with their three-way battle-style, on-the-spot remix, b-boy explosiveness.

Breakbotix spoke to phocas about their music, their future and their new found fame.

DJ Soda: The idea of Breakbotix was to keep it real freestyle with no rules... We never know what other people in the group are going to try... Production-wise, I started making more minimal break beats, fewer melodies and simple bass lines. [This] gave Clockwerk more room to mix over the top. We were taking an old school hip-hop studio setup and doing it live. Drum machines, samplers and turntables--we had a lot of fun and have been booked almost weekly for two years straight.

phocas: How did Breakbotix get started? 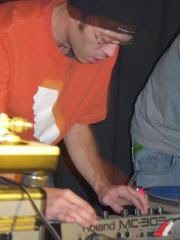 DJ Soda: I had been playing live P.A. for about three years by myself when I moved to KC from Vegas. I thought I would try to find a scratch DJ to team up with. I found this kid named Trey who really just tore it up, so we started Breakbotix... With me on the drum machines and samplers and Trey scratching and mixing over the top. Eventually, Trey’s friend, Clockwerk got booked to play with us at [the party] Super Happy Exploding Fun Ball (c. 2001)--the crowd went crazy, we stole the show and [Clockwerk] became a permanent member of the group. We knew right then we would be doing this more often.

SpinStyles: I had seen Soda and Clockwerk around and chatted with him at parties. Trey had just left to go to Chicago and they needed someone to fill in his role as the scratch DJ. They asked me if I was interested and that where it all started for me.

Clockwerk: We played S.H.E.F. Ball and it blew up. It was the first time we’d ever done it.. no practice or anything. The response was overwhelming to have us do it again. It just kind of became an electronic band after that.

phocas: What is it about your personal playing style /musical philosophy Breakbotix facilitates?

DJ Soda: I evolved into it with no choice. I went from a solo performer into Breakbotix when I joined up with the other guys. I loved to watch the crowd react to a certain remix we do. We will take songs you might know and completely mash them up with a break beat sound. Spinstyles and Clockwerk play over my over my beats, creating brand new remixes of anything and everything. I play all drum machines, samplers and use various effect boxes and controllers. What the crowd is hearing is something brand new and on the spot, created live for them. When we are playing at a show, we are hearing it for the first time ever and sharing that with the crowd. 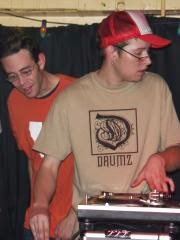 Spinstyles: When I joined, Breakbotix had already had a nice little name buzzing about within the scene. From there, I just wanted to see how far I could push things on my end. [At first] I was just scratching over everything like Trey was doing. Shortly after, I started coming in on the mixes as well with Clockwerk. My style with track selection has always been real hip-hop influenced. Going from hip-hop to drum n’ bass to 2step is where I usually take it.

phocas: What’s the best part about being in Breakbotix?

Soda: I love playing on the huge sound. Where else can I get to do that? There’s something about my hands controlling bass kicks and snares on a huge sound system that is hard to describe. When we are on point and in the zone, it just sounds awesome to me.

Spinstyles: I love playing big parties and watch kids freak out to our sound. Just being able to stand behind the decks and watch that is amazing. 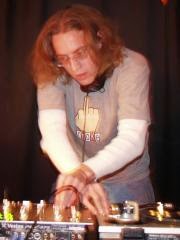 Clockwerk: I like the attention and the energy. When we play a lot of people are curious and they’ll get up and check us out. When people are up front checking us out that helps us play better. The more people that are right crammed up front, it doesn’t matter how many people [are at the show]. If everybody’s up front, that makes it that much better.

phocas: What is Breakbotix’s future?

Soda: Playing shows farther from KC... We seem to be talking production more and more. I think our sound and setup pushes toward a lot of remix work. We are already remixing live on stage, so naturally, I think we will get some remix opportunities. A year from now we will have some records out, we are talking to several big time producers and DJ’s about remixes... Overseas is a big goal for us.