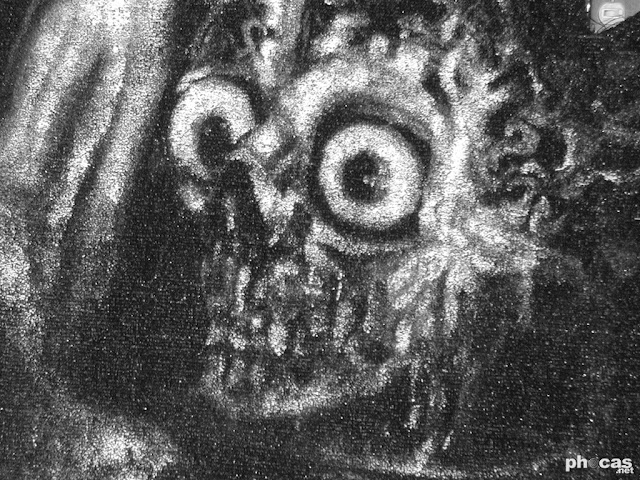 Eyes bulging, a ghostly apparition appears behind the stage at Davey's Uptown Ramblers Club during a performance by Stromkern back in October 2002.  I am not sure if it was a painting hanging back there or actually painted on the back wall.  It's not there any longer though.

Access more photos from a variety of events recently restored to the site from the menu on the right, or the "story archive" tab from any device.

Coming back for what will likely be another strong showing, the Djakarta Warehouse Project.  It is quickly becoming  a global massive.  Attendance last year boasted approximately 90,000, with more than 27,000 from somewhere other than Asia.  The event is hosting some of the biggest names in the industry again this December in Jakarta, Indonesia.

"A Dance Crosses Borders, from the Congo to the Stars" by Paul David Young on Hyperallergic examines a recent exploration of storytelling by Cngolese choreographer Faustin Linyekula and American writer and director Annie Dorsen contemplate storytelling at the Crossing the Line Festival in the Upper East Side of New York.

Ever popular BBC Radio 1 (and 2, 3, and 4) just turned 50, releasing a new segment in their on-going 100 Voices that Made BBC Series.  A cooperative of the University Of Sussex, Mass Observation, the Science Museum Group and the British Entertainment History Project, along with the BBC Oral History Collection reveal some of the hidden stories behind the launch of the 4 radio networks we know and love today.

Pacific Standard Time:  LA/LA, just started and sprawls over hundreds of miles of the Golden State with exhibitions, events, performances and programs, some lasting four months or more.  Check the site link for more information about dates, venues and artists.

An indie game that aims to preserve an indigenous culture and its mythology, promising to immerse the play not only in the game, but also the Tarahumara indigenous culture, in a new form of digital historic preservation.  The 3D action-adventure puzzle game has been in development for about three years now, aiming for a 2018 release on Nintendo Switch, PS4, Xbox One, and Steam.

Restoration is complete through the end of May 2004, and June will be coming along soon.

Interested in contributing a column similar to this, any one of these topics, or if have your own idea, leave a comment below or get in touch with the editor at phocas.net.
by jusTodd No comments: